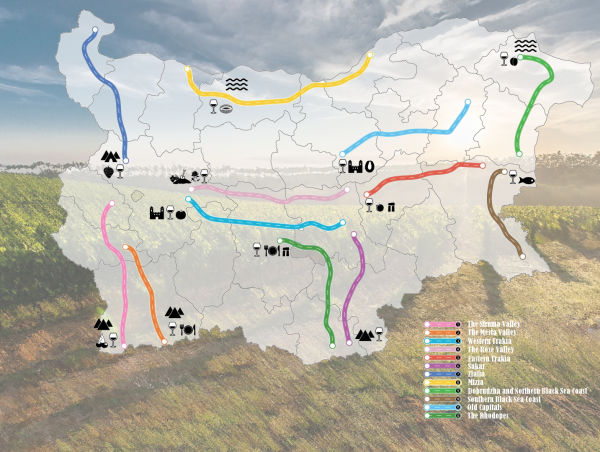 We continue with the next 6 routes, full of beautiful views, tastings, tasty food and meetings that you will remember for a long time.

The Pamid is another one of Bulgaria’s trademarks when it comes to wine. And the Trakian Lowland is one of the best wine regions where you can taste wines of this variety. In the past, the Pamid was the most common wine variety in Bulgaria. Here are some of the best Bulgarian wineries. Add some of the typical dishes of the region to it – leek with chestnuts, stuffed peppers or a koshmer – a cheese dish that is traditionally prepared in the region of Sliven. Besides tasting the interesting food and good wine, you can learn a lot about the millennial history of the country – from Neolithic dwellings in Stara Zagora, through Karanovo mound and the authentic revival places Zheravna and Kotel, to Sinite kamani park and the rock phenomenon Halkata.

The area has many wine tourism opportunities, especially in the Gotse Delchev area. There are mainly varieties grown from which red wine is made – Rubin, Syrah, Cabernet Franc, Cabernet Sauvignon and Merlot. Above all, however, there is another traditional local star Rubin – a Bulgarian variety – a cross between the Syrian Syrah and the Italian Nebiolo. While staying in the Mesta valley, do not miss to try Bansko kapama, Chomlek or Bansko kavarma. Take a stroll to Baikusheva Mura, ancient Nicopolis ad Nestum, Dolno Dryanovo and Kovachevitsa.

Premium wines here are produced by a dozen wine cellars after the area ceases to be a border area. The local star is the Merlot, which you should surely include in your traveler’s wine list from Bulgaria. Sesame Tahan and Tahan-Halva, Kato and Sach with different kinds of meat are the typical dishes to accompany your Sakar tour. The places you can not miss are the Dolmen near the village of Hlyabovo, the Villa Armira, the fortresses of Lyutitsa, Neutzikon and Bukelon, as well as the rock churches in Matochina and Mihalich.

In the region of Ivaylovgrad, as well as around the villages of Tankovo and Popovets, there are small wineries which offer not only good wine but also wine tasting. Along with the famous Merlot from Stambolovo, rare varieties such as Tamyanka and Akhlibar are also available. Attention is paid to the Cabernet Franc wine, which has a strong aftertaste. Patatnik, Rhodopean wedge, Rhodopi sach are the dishes to try while you are in the area. The places you can not miss are Alexandrova tomb, Perperikon, Stone mushrooms, Stone Wedding, Monyak Fortress, Arda Meanders, Tatul and Devil’s Bridge.

The local wineries mainly rely on white wine varieties. The most characteristic is Dimyat – an old Bulgarian variety distributed along the Black Sea coast. It produces white wines and high-quality cognac distillate material. As the Kyustendil region is the orchard of Bulgaria, so Dobrudja is its granary. According to the Bulgarian beliefs, the bread is a sacred, God-given gift of happiness and health. It is accepted not to sit on the table without bread, and every guest is traditionally welcomed with bread and salt. Our suggestion is to try local bread while you are in Dobrudja. And traditional sea delicacies such as horse mackerel, fish soup and mussels. Do not leave before visiting some of the area’s sights, such as the Medjidi Tabia fortress, the Srebarna biosphere reserve, Cape Kaliakra, the palace in Balchik, the Aladzha Monastery.

Many of the good Bulgarian wines are born here from the Chardonnay, Aligote, Dimyat, Rizling, Traminer, Muscat Ottonel, Tamyanka, Juni Blanc, Sauvignon Blanc. Here they produce fine matured brandy created by classical cognac technology. The star tour is Chardonnay from Pomorie. Combine it with Bourgas mussels, fish plaque, Black Sea turbot, mackerel on the tile – a specialty in Nessebar or a green figs jam – it is made in a traditional recipe for centuries in Sozopol. Explore the island of St. Anastasia, the Roman town of Deultum, the ancient tomb in Pomorie, the Trakian sanctuary Beglik Tash or the Strandzha villages.