It is located in… Dorkovo village, just a few kilometers from the Spa Resort of Velingrad. This is the largest paleontological museum in Europe, where everyone can see live huge 10-foot mastodon, rebuilt discovered near the village authentic prehistoric bones.

The largest paleontological museum in Europe

The area of Dorkovo has been known long time ago beyond the borders of Bulgaria as prehistoric field. Serious inquiries are started in the early 80’s of last century from Bulgarian-French scientific expedition, part of which were the present director of the National Museum of Natural History – Professor Nichola Spassov and world famous French paleontologist Professor Thomas Erber.

According to experts, in the land of Dorkovo is the largest concentration of prehistoric sites in Europe. Here exactly most of the bones of the „surviving” (with the help of special resins) mastodon have been found. Scientists suggest that the area of Dorkovo was riverbed where animals went to drink water. Due to the occurred about 5 million years ago natural disasters – prolonged drought, the river dried up and this led to the death of the former fauna.

The museum is housed in a round building with a diameter of 16 meters and whose roof is glazed to let in enough light. To the newest attraction in this region of Bulgaria leads a new asphalt road. The main exhibit – the mastodon, is surrounded by a massive diorama, which, like the huge picture shows what the flora and fauna were millions of years ago. Visitors will be able to see other original pieces: 4-foot tusks, restored and preserved in France, bones of other animals so far unknown, etc. Special audio effects, especially animal sounds, will guide the guests in “authentic” atmosphere of the prehistoric times.

There is an idea to terrace the surrounding strata in a manner so that tourists may see the bones of giant animals in their natural form as they are under the ground. 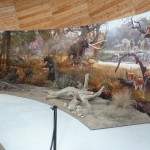 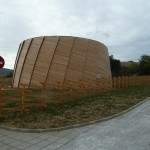 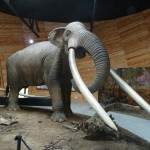 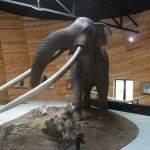