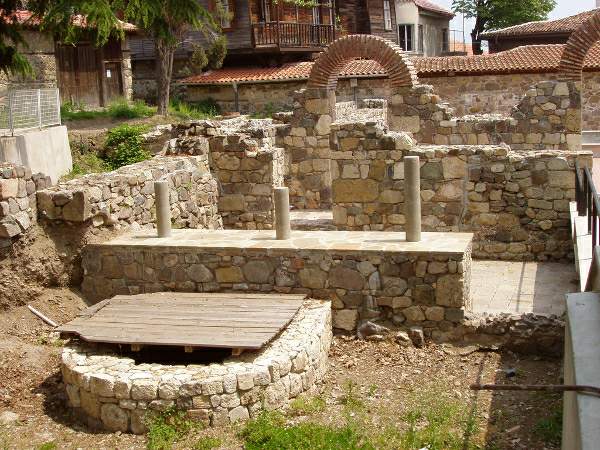 At the end of July this year the ancient Sozopol was arena of unique find of great historical value. On the nearby island of St. John, a team of archaeologists led by Professor Kazimir Popkonstantinov discovered relics of St. John the Baptist! Tooth, remains of hand and jaw, found by the archeologists during excavations on the island in relics storage box of alabaster, sealed with red mortar, proved to be authentic. The remains of the saint had been present on the altar space of an old monastery complex, that had been existing 12 centuries long and had been left by the monks in 1620.Placed in a temporary storage, the relics were transferred into the church of St. George in the Old town of Sozopol, where a portion of the Holy Cross is also stored. After restoration of the “St. st. Cyril and Methodius” church, they will be permanently moved there, as the central and most revered temple in the city. A new relics storage box on special order will be also drawn, as a personal gift from the Bulgarian prime minister Boyko Borisov. It will be from silver with gold plating and inscriptions from St. John’s life. The author is Gancho Ganev – master from Plovdiv, who had made the icon of Virgin Mary from Bachkovo monastery, as a gift to the Pope John Paul II on his visit to Bulgaria a few years ago. It is expected that the relics of St. John the Baptist will be placed in the new storage for the Christian holiday of Virgin Mary on August 15th.

The Bulgarian government will grant 420,000 Euro for the restoration of the “St. st. Cyril and Methodius” church. The excavations on the island of St. Ivan are going to proceed, and 90 percent are funded by the Norwegian Government through the European Economic Area. The project was developed and presented by the Sozopol Foundation, which has also similarly restored the south wall of the ancient city, built during the reign of Emperor Anastasius about 511 AD.

The discovery of the relics of the saint baptist of Jesus Christ, who had foretold his mission as well, caused a huge interest among both academics and general public, as well as guests of the town. Every day hundreds of people come into the temple to worship the relics, to light a candle for health and welfare. Along with Istanbul, Damascus and other places associated with the relics of St. John the Baptist, Sozopol is also expected to attract more tourists and pilgrims from all over the world.

Moreover – world famous medias such as CNN and National Geographic, want now to shoot a film about the relics!