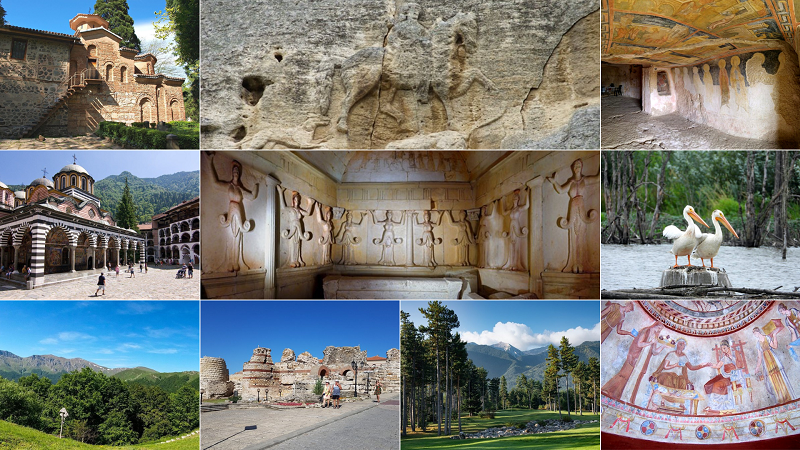 We are ready to give at least ten reasons to visit Bulgaria, especially if you have a to-do list with UNESCO sites worldwide. The prestigious organisation has become a synonym for unique historical, cultural and natural objects with the primary aim to collect and promote them. The selection of UNESCO recognises the high value of these places in global culture and a reason for sharing their stories. Although Bulgaria has many sites to share for its more than 1300-year history, UNESCO includes ten of them in its lists. Here they are.

Which are the unique cultural UNESCO sites?

The seventh places are an impressive example of the country’s historical wealth. Each of the sites shows the local flourishing throughout the past 10000 years.

The place is one of the almost 300 spots that form the Valley of the Thracian Rulers in Bulgaria. The archaeologists suppose that their number approaches around 1500. The Thracian tomb of Kazanluk – a UNESCO object since 1979 – is amongst the richest ones. It was discovered accidentally by soldiers in 1944 and had belonged to the Thracian Reign Roygos about IV-III B.C. The tomb had located nearby the  Ancient town of Seuthopolis. It still impresses with its masterful frescos.

The spot is the second similar landmark that UNESCO admits because of its unique architecture and decoration. The Ruler’s tomb is an exceptional example of the Thracian culture flourishing in the Bulgarian lands. It situates in the northeast part of the country, nearby Sveshtari village. Due to the archaeologists, it was built in the first half of the Century III B.C. and there lay down the Getae’s Reign – Dromichet. Processed white limestone blocks make the entire tomb. The other impressive value of the site is the rich interior ornamentation. The archaeological object in the region is a part of a whole reserve with 26 preserved mounds. The scientists suppose that the ancient town of Hellis was located nearby. 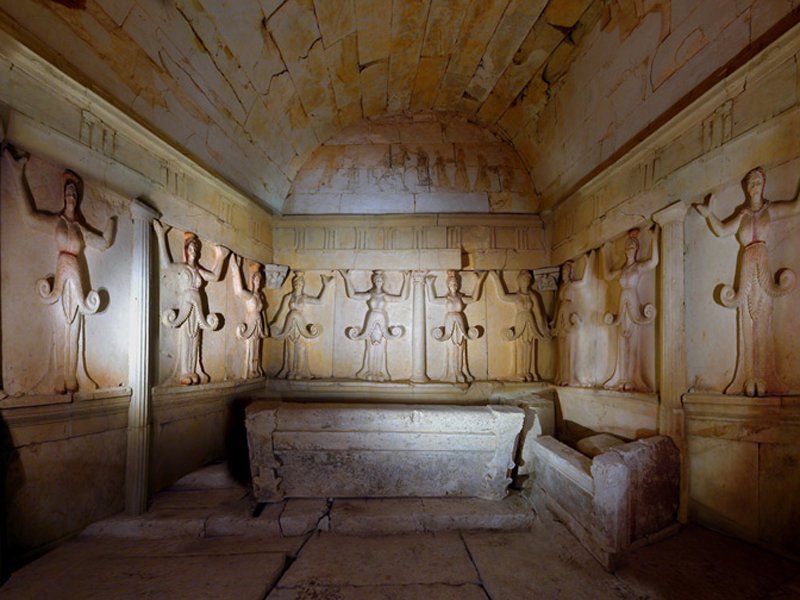 The Ancient town of Mesambria is one of the oldest in Europe, more than 3200 years. The Thracians called it Melsambria. Information about the settlement population dated first to the end of the Bronze Age. The town has had two ports, where ancient ships’ remains are still discovered. In the first half of Vth Century B.C., the settlement has begun to mint its silver coins. The peak of its development had become about two centuries later when a gold emission was also mint. Nessebar continues to be Rulers preferred place throughout the following ages as it had an essential role during the First and Second Bulgarian Kingdoms and the local Revival. Most of the preserved houses in the Old Town are from this period and complete the coastal settlement charm.

The site is an exclusive example of early Medieval Bulgarian art. It was carved at 23 m height onto a vertical rock. The bas-relief shows a hunting scene of a rider with his dog and a fell lion. Because of the inscriptions around the image, the experts associate it with the beginning of the First Bulgarian Kingdom and tell of important events related to the Bulgarian Rulers Tervel, Kormisosh and Omurtag.

The chapel became a UNESCO site due to its unique Medieval frescos that the experts define as an example of the most significant achievements of the Bulgarian icon-painting school. The year of their creation is 1259, and the images’ personalities and expressions continue to impress.

The locals built the non-conventional monastery complex during the most notable years of the Second Bulgarian Kingdom. Instead of traditional architecture, people created churches in rock niches. In six of them, still, there are well-preserved frescos. The location is on the territory of the Rusenski Lom Naturе Park. 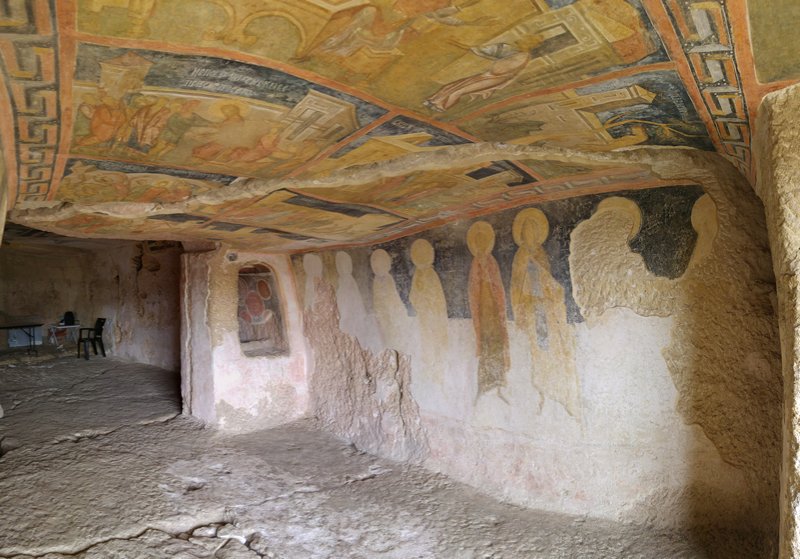 The spiritual place is the largest monastery in Bulgaria. The Saint John of Rila – one of the most revered local Saints, founded it. The location of the abbey nowadays is close to the original place. The experts define it as a one-of-a-kind architectural and historical object. There also conserve rare manuscripts, old printed books and documents from the 14th to the 19th century.

And the big three natural UNESCO sites – which are they?

Bulgaria abounds in unique natural phenomena – natural rock formations that impress with their shapes and legends, plant and animal species. Three of them are why UNESCO includes the country in their list.

The reserve is home to 22 protected plant and animal species of international importance. Among the unusual inhabitants of Srebarna are the Dalmatian Pelican (Pelecanus Crispus), the Lesser White-fronted Goose (Anser Erythropus), the Ducks (Anatidae), the Mustache Tit (Panurus Biarmicus), the Great White Egret (Ardea Alba), the Lesser Swan (Cygnus) (Phalacrocorax Pygmeus). The lake is a unique area for ornithologists because a camera installed in the middle shows the daily life of the species. It is also an essential point on the Via Pontica route of migratory birds to Africa. 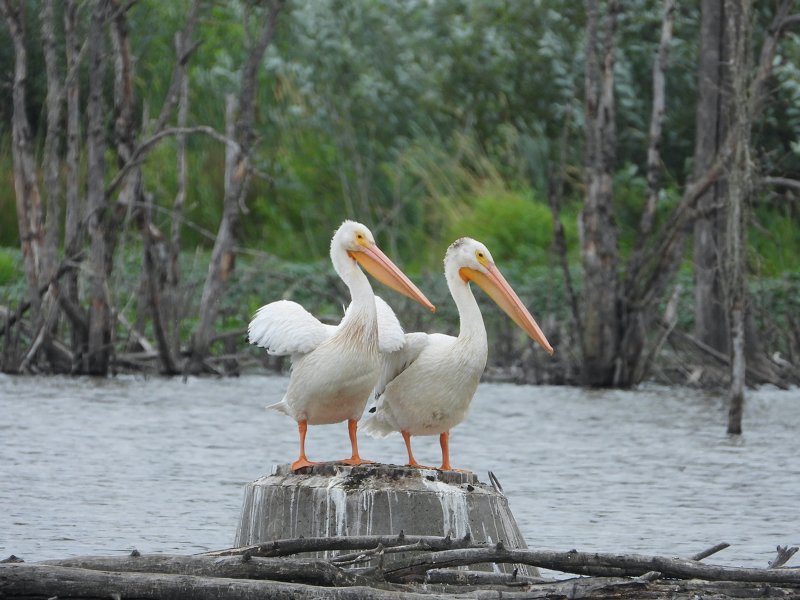 Photo by Michelle Madsen on Unsplash

The park has an area of 40,000 ha. One of the oldest reserves in Bulgaria is Bayuvi Dupki – Djindjiritsa is a part of it. The experts find a large variety of higher plants, mosses and algae. One hundred eighty-two species of medicinal plants grow in the park. The animal world is also wide diverse – there inhabit species such as the tree frog (Hila Arborea) and the spiny-tailed tortoise (Testudo Hermanni), which are on the Red List of the International Union for Conservation of Nature.

The centuries-old beech forests of the Central Balkan National Park

The Bulgarian territories are just one of the 94 component areas in 18 countries listed in the UNESCO list. And also unique ones. The trees there have approximate age of 130 years. These woods are of wholly natural origin and have fully preserved shape. More than three-fourths of them are over a hundred years, hundred and fifties years forests occupy about 14,000 ha. In some places, the age of the living forests reaches over 240 years. Many of the old natural forests belong to “virgin” forests, which means that people have not interfered in their development.

The centuries-old beech forests of the Central Balkan National Park

Our team knows even more about these UNESCO places, and we are ready to share stories, legends, and unforgettable experiences with you. Choose your spots and leave the rest of the organisation to us.