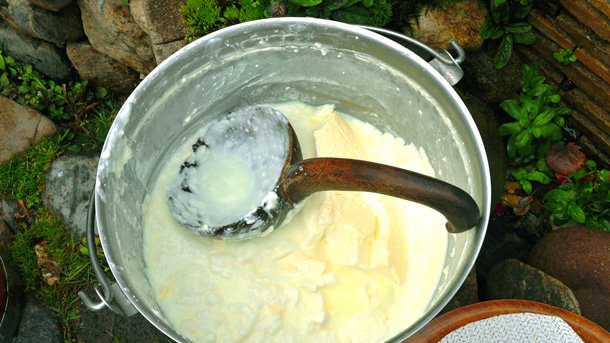 There are multiple ways to know Bulgaria. However, three of them have centuries-old heritage, traditions and the locals’ soul. These are the roses, banitsa, and the yoghourt (sour milk). The main character in the article is the last one.

If you were travelled a lot, you have had the chance to taste different varieties of yoghourt around the world. In Bulgaria, however, the taste and properties of the food are like nowhere else. This is due to the bacteria that determine the density and acidity of the milk and exist only here.
One of the two main types of microorganisms that cause fermentation is Lactobacillus Bulgaricus. ‘Bulgaricus’ because it was discovered at first by the Bulgarian scientist Stamen Grigorov in the country. His research was conducted in the early 20th century. Scientists from different countries have repeatedly proven the beneficial effects of sour milk on the human body after then.
After Grigorov’s discovery, the Russian scientist Elie Metchnikoff made the verification as he repeated the exact research because of his interest in longevity. According to Metchnikoff, the unique bacteria in the Bulgarian sour milk composition effectively counteract the ageing processes and autointoxication of the human body.

What the world knows about the yoghourt

Metchnikoff statements are also used as a base by Asian scientists a few decades later. Their research proved once again that sour milk efficaciously helps for increases the quality of life and longevity. The global expansion of the Bulgarian sour-dairy product began exactly after these studies.
It is known and favourite on three Continents leastwise. There are Ambassadors of its benefits in Europe, Asia, and North America.

A half-century history in Japan

The story began in 1970 in Osaka during the World Expo when team members of Meiji Company tasted authentic Bulgarian yoghourt at the national booth. The company’s attempts to impose the product have been unsuccessful so far. Since 1996 Meiji Company had the right to set a specific government-proofed seal for Food for Specified Health Use (FOSHU) on its Bulgarian sour milk packs. Almost 50 years later the sour milk is one of the favourite healthy proofed products for the Japanese.

A decade in China

In recent years Chinese scientists research the connection between the longevity of Bulgarians in certain parts of the country and the yoghourt in depth. And they confirm it. Especially for that, Momchilovtsi village in The Rhodopes became a favourite place for Chinese tourists. Both locals and tourists are convinced of the particularly beneficial properties of the product.
The dairy product gains more popularity in North America as, in recent years, sour-milk bacteria are using for natural preservation in producing fruit drinks. The wholesome microorganisms also become part of the compositions of space foods, probiotics, even beer.

What health benefits have the Bulgarian yoghourt

The studies display that the sour product has a higher nutrient density than milk because of the fermentation. The lactose-containing is 20-30% lower.  The rest of it serves as an energy source.
The yoghourt is a rich source of calcium, a fundamental element in the formation and strength of bones and teeth.  Furthermore, it contains also potassium, proteins and B group vitamins. According to the studies, the regular consummation of sour milk strengthens the immune system. The Lactobacilli support the intestines activity, increase the number of absorbed nutrients, and keep the digestive system healthy.

Delicious ways to taste it

You can try it as independently as in combination with a wide variety of delightful meals. It could be eaten all day round, at any time, in any case. Its best units are with banitsa and cookies. It can be an ingredient for sauces, cold soups or different pastries.
The yoghourt has its own Museum.
The only Museum of yoghourt in the world is established in the birthplace of the scientist Stamen Grigorov who had discovered Lactobacillus Bulgaricus – Studen Izvor.
This traditional food has an essential role in Boiana-MG travel programmes with an accent on the culinary traditions of the country and the whole Balkan region.