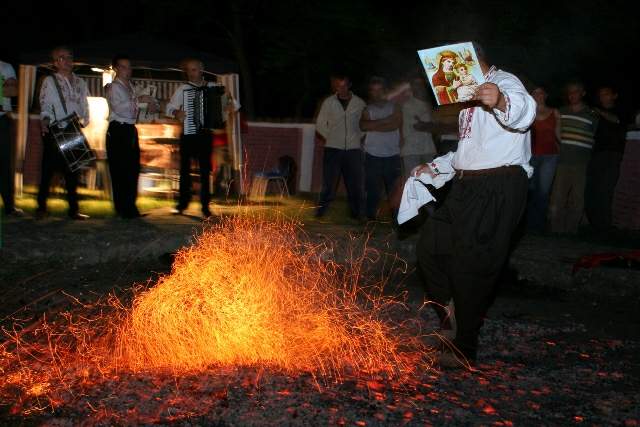 A few days ago the sixth in the world Center For The Protection of Intangible Cultural Heritage, supported by UNESCO, was opened in Sofia.

After Japan, China, Peru, South Korea and Algeria, this is the first specialized institution in Europe with similar functions.

The General Director of the Organization – Ms Irina Bokova attended the opening. She wished to Bulgaria to propose other of its monuments to be included in UNESCO List of World Heritage.

As it is known, 9 tangible objects in Bulgaria are included in UNESCO list so far: Rila Monastery (X c), Boyana Church with its unique frescoes from the XIII century, Thracian tomb in Kazanlak (IV BC), Thracian Tomb in Sveshtari (III c. BC), 25-meter-high rock relief Madara Horseman, Ivanovo rock churches with their magnificent wall paintings from the middle of the fourteenth century, “Sreburna” Natural reserve – home to rare birds, and Pirin National Park.

Ofcourse we have candidates for new participants in the UNESCO list.

Among them, with the greatest potential, seems to be the Magura cave, located in the northwestern part of the country which is famous for its prehistoric paintings and icon images of hunting scenes and a solar calendar.

In the Intangible Heritage of UNESCO Bulgaria performs with the folk singing group “Bistritsa Grannies” and the ancient custom of Nestinar dances – dancing on glowing embers.

This authentic folklore group from Bistrica village was founded in 1946 and presents original songs from Shopski region of Bulgaria (west part of the country, Sofia surroundings). The songs are performed without musical accompaniment, using so-called polyphonic singing on three voices – with a distinctive melody, preserved through the centuries. The singers are old women, but the group involved also their grand-daughters. In 2005 “Bistritsa Grannies” are included in the List of UNESCO among the masterpieces of intangible cultural heritage. The group has performed in many countries of Western Europe, and has won prestigious international awards.

This is an ancient custom, which some historians have been associated with pagan rituals, from the time of the Thracians – the oldest civilization in the Bulgarian lands. For the first time the practice was documented in 1862 by the Bulgarian poet, intellectual and activist of the National Revival Petko Slaveykov.

Traditionally, the fire dance ritual begins in the early morning of May 21 or June 3, when the Bulgarians celebrate the Day of two saints: St. Constantine (Roman emperor Constantine the Great) and St. Elena – his mother. Procession led by the dancers on fire, takes from the church the two icons of the saints and goes to the holy spring. There the icons are sanctified, a traditional Bulgarian dance, named “horo” is performed, accompanied by drums and bagpipes.

After the dedication of the icons, the dancers go to a chapel called Konak, where they spend their time until the evening, listening to the rhythms of the drums until they fall in a trance. A fire with glowing embers is set on the village square. The oldest and most experienced fire dancers (obligatory with bare feet!) enter first in the fire, after making three tours around the embers and cross them. Then the younger fire-dancers entered in on the embers with icon of the saints in their hands. When the dance ends, the most astonishing is the lack of any burns and wounds on the dancers’ legs.

As a tourist attraction, fire dances are included in the programs of many restaurants on the Seaside and inland the country. In Bulgaria this custom is preserved in its authentic form in one village in Strandja Mountain – Bulgari. Usually the ability for dancing on glowing embers is a family tradition, transmitted from generation to generation. 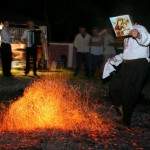 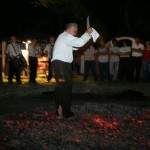 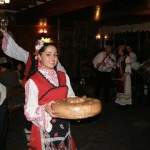 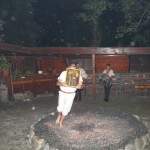 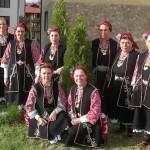 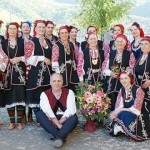